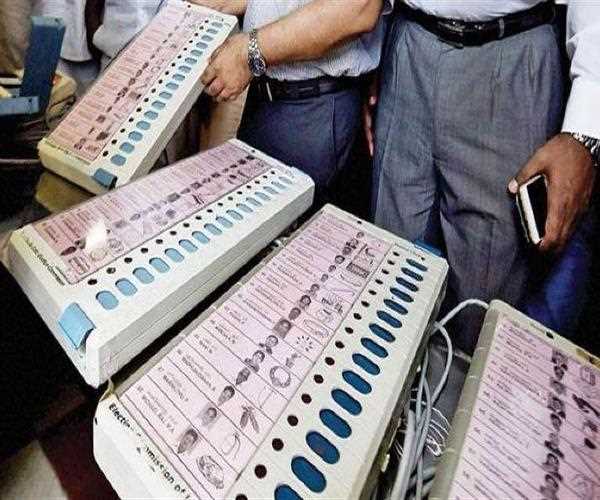 Is EVM Tampering Possible ? The EVM machine used for voting consists of two units - the control unit and the balloting unit. These two units are connected by five meters of wire. The control unit is with the polling officer appointed by the Election Commission.

The balloting unit takes place in the polling room in which voters cast their votes. Voters vote their favorite candidate and his / her election symbol with complete secrecy.

The control unit is the "brain" of the EVM. The balloting unit is operational only when the polling officer presses the "ballot" button in it. The EVM is powered by a six-volt single alkaline battery that is mounted in the control unit. It can also be used conveniently in areas where there is no electricity.

The Election Commission conducted a practical test of EVMs for the first time during the 1982 Kerala Legislative Assembly elections. Under the Representation of the People Act (RP Act) 1951, only ballot paper and ballot box could be used in elections. However, without waiting for the constitutional amendment, the Commission used the EVMs on 50 out of a total of 84 polling stations in Kerala's Paravur Legislative Assembly using the emergency right granted under Article 324.

CPI candidate Siwan Pillai filed a writ petition in the Kerala High Court questioning the use of EVMs. But when Pillai won the election by 123 votes, the Congress candidate Jose reached the High Court.

After the Supreme Court's decision, the Election Commission stopped using EVMs. The 1988 amendment to the RP Act made the use of EVMs legal. In November 1998, EVMs were used as an experiment on 16 assembly seats in Madhya Pradesh and Rajasthan (five polling stations each). At the same time, they were experimentally used in six legislative assembly seats of Delhi. In the 2004 Lok Sabha elections, EVMs were used throughout the country.

Germany and the Netherlands prohibited the use of EVMs for lack of transparency. Italy also feels that the results may be affected by EVMs. Ireland spent three and a half million pounds in research on EVMs and abandoned its use. Many countries, including the US, prohibit EVMs with no paper trail.

After this, the party, with the help of Indian and foreign experts, many NGOs and its think tank, campaigned throughout the country about the tampering and cheating of EVMs.

In this campaign, in 2010, the current spokesperson of Bharatiya Janata Party and electoral affairs expert GVL Narasimha Rao wrote a book - 'Democracy at Risk, Can We Trust or Electronic Voting Machine?'

The book was written by Lal Krishna Advani and the message of N. Chandrababu Naidu, the current Chief Minister of Andhra Pradesh, is also published in it.

Not only this, Professor David Dill of Stanford University, an expert on the voting system in the book, has also told that the use of EVMs is not completely safe.

Bharatiya Janata Party spokesperson GVL Narasimha Rao wrote in the beginning of the book- "Machines can be tampered with, the electronic voting machine used in India is no exception. There are many instances when votes have been given to one candidate to another candidate or the candidates have got votes which were never cast. ”

In May 2010, scientists at the University of Michigan, USA, claimed that they had the technology to hack India's EVMs. Researchers claimed that after connecting a homemade device with one such machine, it was found that the results can be changed through a text messages from mobile.

Although former Election Commissioner TS Krishnamurthy has a different opinion. He has said, "The machines used in India are strong machines and I don't think they can be hacked."

He said, "It may happen that the machines running at the polling booth are not able to run it properly but these machines have to undergo rigorous scrutiny before voting." Some people demanded a paper trail in it and it was added later.

Arun Mehta, a professor in the research and technical development department at Sharda University, says, "EVMs have computer programming and can be changed. You can try to improve it, but also see that hackers are also getting better."

1. With the use of EVMs, the expenditure of lakhs of rupees on printing of ballots and labor of employees can be worked out.

2. It is much easier to carry EVMs than ballot boxes.

3. The counting of EVMs can be done very fast.

4. Correct voting can also be done by illiterate people.

5. The use of EVMs reduces fake voting.

2. EVM's hardware is also not safe - the software used in EVM is designed for voting machines, if it is destroyed by a software attack, then new software can be created and the same can be done on its hardware. Is applicable.

3. EVMs can be hacked - because the software or hardware chip can be easily changed in EVMs.

4. Collusion and the risk of scams - Election officials, Electronic Voting Machine Manufacturers, Bharat Electronics Limited (BEL) and Electronics Corporation of India (ECIL), foreign companies that supply chips for EVMs, private companies that use EVMs Maintenance and investigation (of which some companies are run by politicians), any of them can be involved in collusion and scams.

5. Method of collecting and counting of EVMs is a matter of concern - EVMs are deposited at the district headquarters. “Everyone watches the turnout closely. But no one watches the counting closely. The counting game is over in just three hours! In the rush to announce the results and winners, many serious flaws are overlooked in the counting process.