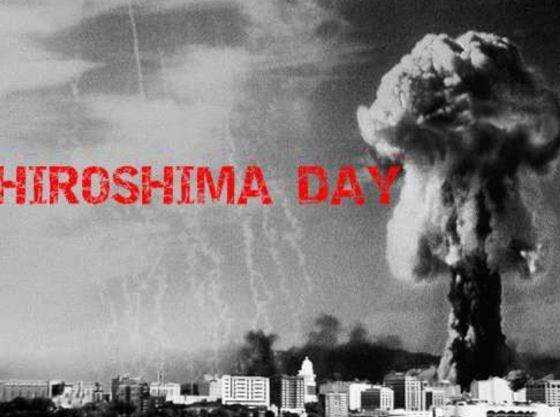 Japan is celebrating the 75th anniversary of the nuclear bomb attack on its two cities Hiroshima and Nagasaki on Thursday, August 6, 2020. On August 6, 1945, Hiroshima was attacked by an atomic bomb at around eight in the morning. This attack was so tremendous that more than 80 thousand people died due to it in a few moments.

Japan was not overcome by the atomic bomb attack in Hiroshima that three days later, on August 9, a second nuclear bomb attack took place in another city Nagasaki. At about 11 am on this day, an atomic bomb was dropped over the city. More than 40 thousand people lost their lives in this attack. Thousands of people died in both cities due to exposure to radioactive radiation after the explosion and 'black rain' after the explosions.

At 8.15 am in Hiroshima, there was such a blast from the atomic bomb that 80 percent of the city was blown into the air within 43 seconds. The nuclear attack on Hiroshima was actually a revenge for the 1941 attack by the Japanese forces on the US naval base Pearl Harbor.

Recently, a district court in Hiroshima has recognized 84 survivors of the 'black rains' after the nuclear explosion as victims. Now all these people can avail of free medical facilities available as victims of a nuclear explosion.

READ HERE MORE : Why Is Microsoft Interested In Buying TikTok

The survivors of the 'black rain' described it as large drops of rain that were much heavier than normal raindrops. According to the survivors of this incident, the skin of many of the victims of the incident was burnt and people were severely dehydrated.

According to the information obtained from studies in this regard, black rain, which was highly radioactive, exposure to this rain had led to several serious diseases. A study conducted in the year 1945 shows that black rain occurred in an area of ​​about 29 km from ground zero. This rain contaminated everything they came into contact with.

Black rain caused acute radiation symptoms in many people (Acute Radiation Symptoms-ARS). Some people suffered from cancer and some people lost their eyesight. The land and water of the city were also contaminated by radiation.

Japan was supporting Germany in World War II. Germany surrendered in May 1945 itself. In July 1945, US President Harry Truman, British Prime Minister Winston Churchill and Soviet leader Joseph Stalin met in the German city of Potsdam to consider the post-war situation, one of the reasons that the war in the Pacific had not yet ended. . Japan was still not ready to surrender to the Allies.

It was in Potsdam that US President Truman received information that the atomic bomb test in New Mexico had been successful. In Potsdam itself, it was agreed between Truman and Churchill that if Japan was not ready to surrender immediately without condition, then a nuclear bomb would be used against it.

On August 1, 1945, a date for a nuclear attack on the Japanese city of Hiroshima was set due to Japan not surrendering. But due to the storm, the attack had to be stopped on this day, five days after it was attacked.

Japan was not ready to surrender despite the attack on Hiroshima. So three days later the US dropped the second atomic bomb on Nagasaki. Kyoto was chosen for the first attack, but the city of Nagasaki was chosen following the objection of the US Defense Minister. The bomb named Fat Man dropped to Nagasaki with a power of 22,000 tons of TNT.

The day after the nuclear attack on Nagasaki, Emperor Hirohito of Japan ordered his commanders to surrender to the Allied forces on the condition of protecting the country's sovereignty. The Allies refused to accept the condition and continued the attack. Then in a radio speech on 14 August, Emperor Hirohito announced his surrender unconditionally, arguing that the rivals had 'inhumane' weapons.