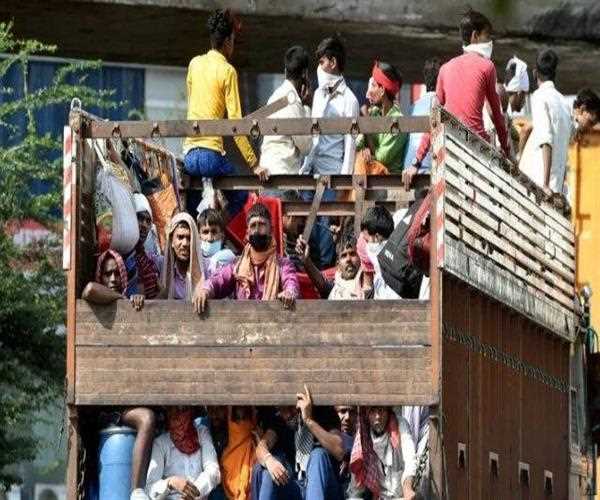 It has been announced to start employment campaigns first in Bihar and now again in Uttar Pradesh. Where Nitish Kumar has said that under this, 3.43 crore rupees will be spent in every panchayat, while there is information from Uttar Pradesh that 1.25 billion people will get employment.

The main reason for this is that the economy has suffered huge losses due to migrant laborers going home and the economy does not seem to be back on track despite the government announcing all the relief packages.

Whether it is the problems of Punjab's farmers, or the problem of the common producing farmers of Telangana, or the construction of roads by the Border Roads Organization, the construction work in Karnataka, all these works came to a standstill due to shortage of laborers. Workers have been recalled from Bihar by making special transport arrangements in Telangana and Punjab.

The government has been constructing the infrastructure along the border very vigorously for some time, but when it started to suffer due to the workers going back home, the workers were taken by special planes after talking to the Jharkhand government.

These three examples show that whether it is farming, building construction or infrastructure development, we need workers for all this. But so far we have not been able to create a safe environment that the economy can run as smoothly as before. No matter how much we promote the digital economy, labor is very important for our economy.

The workers who have returned to their villages are not ready to return immediately. Some workers said that they have not thought about returning at the moment, even if no means of living is found in the village, they will return only after Chhath.

It is not even possible to accommodate so many workers in the rural economy. Not everyone can live in farming. Though there is talk of providing employment in MNREGA, but how many people will get employment, it is difficult to say.

The workers who have returned to the village are also thinking that when the outbreak of the epidemic in the cities stops, only then will they turn to the cities. Broadly speaking, the atmosphere is discouraging. It would not be easy for the workers who had become skilled, worked on machines, to return to farming.

On the basis of religion or caste, but on a regional basis, there has been an increased feeling of mutual cooperation and solidarity among the people. This group will affect not only the rural economy but also the social structure and local politics.

As far as the rural economy is concerned, there are only three employment opportunities in the village - brick kiln, harvest and MNREGA. Apart from this, there is no major source of employment in rural areas and no industry can be started overnight. Bihar and Uttar Pradesh are the areas of India which have the highest number of youth.

In the employment campaign that has been talked about, most people will be provided work under MNREGA itself and some people will be given skill training to start self-employment. But only on the strength of MNREGA and ration distribution, the economy cannot be pushed forward. For this, industries related to agriculture will also have to be started in rural areas.

There is huge anger among the migrant laborers. Along with the ruthlessness of the urban rich class, neglect and indifference of the political class has also angered him. There was a fear of illness, he was not given an opportunity to live with dignity during the crisis and due to the rude attitude taken with him, he returned to his village-home. Urban India does not know the reality of rural India.

He feels poor sick, poverty seems sick. There is so much hatred and petty sentiment among the urban people towards the poor, towards the farmers, towards the workers that it cannot be mentioned. The newly born people feel that the government's job is only to fulfill their ambitions.

The issue of farming and farming is the most important issue in Indian politics. These workers and farmers are the backbones of India's economy. Even today, if a large area of ​​the country survives this disaster, it is a rural area. During this crisis, it became clear that the agricultural sector remains the backbone of the Indian economy even today.

Therefore, the government should open ten big hospitals only in rural areas of Uttar Pradesh, Bihar and Madhya Pradesh. These hospitals should be institutions of medical education and research. Apart from this, more and more agriculture-based employment opportunities should be provided in the rural areas itself.