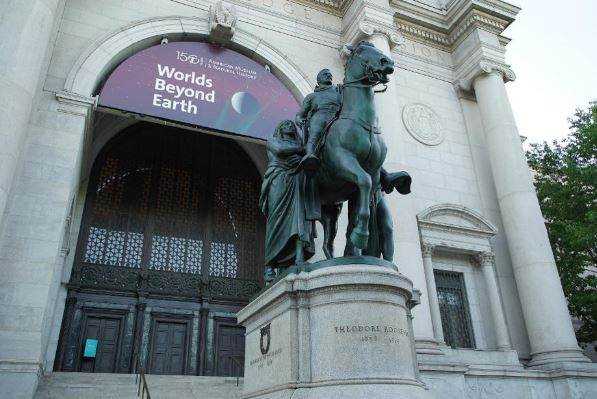 The Statue of 'Racist' Theodore Roosevelt outside a museum in America is being removed. Mayor Bill de Blasio said on Sunday that the American Museum would remove a prominent statue of Theodore Roosevelt from its entrance due to years of objections.

Objections were being raised about this idol for years. In addition, this statue is a symbol of colonial expansion and racial discrimination. A bronze statue of Roosevelt has been standing at the Museum's Central Park West entrance since 1940, depicting Roosevelt on horseback with a Native American and an African man.

De Blasio said in a written statement that the American Museum of Natural History has questioned the removal of the statue of Theodore Roosevelt because it explicitly subjugates and racially demeans blacks and indigenous people. The entire city is supporting this request of the museum. This decision and time to remove this controversial statue is right.

The museum's president, Ellen Futter, told the New York Times that the mass movements that have been taking place after the murder of George Floyd have affected the people of the museum.

He said that we are seeing that the attention of the world and the country has increased towards these idols and all have been seeing these idols as powerful and hurt symbols of racism. Museum officials said that it has not yet been determined when Roosevelt's statue will be removed and where it will be kept after removal.

Former President's great-grandson Theodore Roosevelt IV said in a statement to the Times that the structure of the Equestrian statue does not reflect the legacy of Theodore Roosevelt. Futter said the museum has opposed the statue, not Roosevelt. According to Futter, Roosevelt served as the Governor of New York before becoming the 26th President of the United States.

In 2017, the protesters spilled a red-colored fluid under this statue, representing red blood. The protesters published a statement demanding the removal of it, symbolizing patriarchy, white supremacy, and colonialism.

A year ago, before the presentation on Roosevelt's sculpture opened at the exhibition hall, The New York Times distributed an opinion piece named 'Who claims Theodore Roosevelt' by Clay Risen, who composed that bigotry was "key to Roosevelt's vision for America, and not only an ancient rarity of his time and spot". There have been other exploration papers and books distributed regarding the matter of bigotry in the US where Roosevelt discovers notice.

Scholars of history accept that Roosevelt was likewise a supporter of genetic counseling, to such an extent that in 1905, he gave a discourse where he endeavored to push the story of the indicated dangers of "race self-destruction". Pundits of the 2019 show at the American Museum of Natural History had said at the time that these parts of Roosevelt's personality had not been tended to by the exhibition hall nor generally referenced.

Well, this is also the high time of doing left versus right politics in USA that's why we will see Roosevelt as well Lincoln being dragged into the game of politics but a sensible US citizen should focus on the issues and shall vote in the national interest.