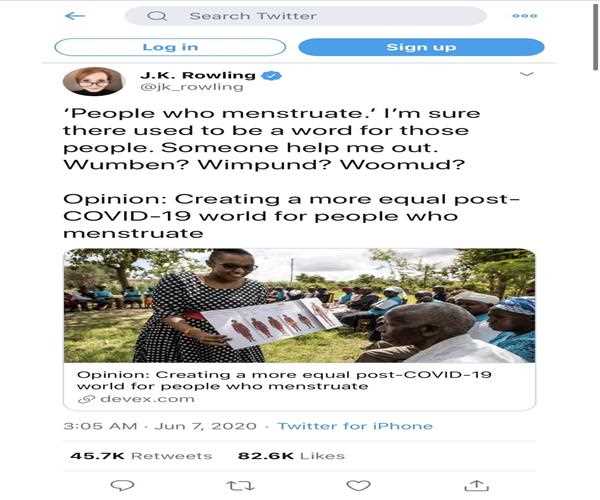 You sure would have heard about the all time fantasy and witch-craft famous novel The Harry Potter and if not, I have nothing but pity for you.

The writer shared an article and had some objection on the title given to it.

Adding as her opinion: Creating a more equal post-COVID-19 world for people who menstruate.'

Rowling tweeted on Saturday evening "'People who menstruate.' I'm sure there used to be a word for those people.Someone help me out. Wumben? Wimpund? Woomud?"

Soon after the tweet, Rowling was slammed with quick and angry criticism by her fans calling her transphobic and defending the whole transgender and even the female community.

People stated that the tweet was not only biased but questions a person who has menstrual period!

Some pointed that people who are women or others not identified as women, transgender male or non-binary still menstruate.Period.

One person wrote, “I know you know this because you have been told over and over again, but transgender men can menstruate. Non-binary people menstruate. I, a 37-year-old woman with a uterus, have not menstruated in a decade, women are not defined by their periods.”

Daniel Radcliffe, Freddie Redmayne, Halsey, Sarah Paulson and many other celebrities denounced her for her opinions.

Calling her argument totally blatant and rhetoric, some even referred to her tweet being strategically made so as to dismay people from some other important matter hash tagging #BlackLivesMatter

“Make no mistake—@jk_rowling’s timing is intentional and strategic. Her anti-trans rhetoric, based solely on debunked scientific myths, is meant to serve as a distraction from BLM and is further proof of her white supremacist position. T*RFs are neo-nazis.”

Though Rowling tried on clearing the air with more tweets and explanation which further led to more retaliation.

Surprisingly, this was not the very first time she got in such controversy.

Her previous comments on transgender community have counter blasted.

She supported a female researcher, Maya Forstater, who for some transphobic tweets led to loss of her job. Rowling supported her on Twitter by tweeting,

"Dress however you please. Call yourself whatever you like. Sleep with any consenting adult who'll have you. Live your best life in peace and security. But force women out of their jobs for stating that sex is real? #IStandWithMaya #ThisIsNotADrill”.

Aspiring blogger and travel enthusiast! I enjoy writing on a variety of topics and take love immersing myself in learning about new and exciting things. “I do believe something very magical can happen when you read a book.”