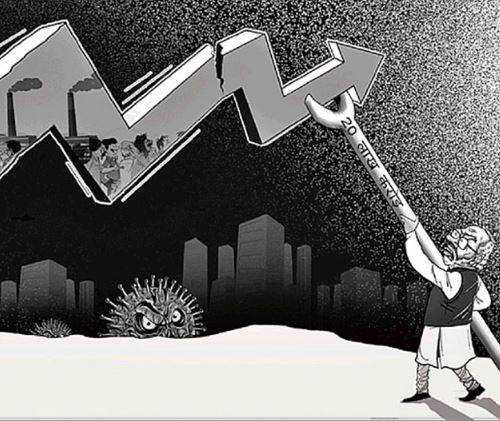 Corona Pandemic Has Given Chance To Remove Red Tapeism

Due to the Covid-19 disaster, economies of all the countries of the world are going into the abyss and the situation is expected to remain more or less the same till no effective treatment is found for this epidemic. In this era, challenges have also increased for India, to overcome which Prime Minister Narendra Modi has announced a relief package of Rs 20 lakh crore.

This is expected to support the economy. India has been successful to a great extent in recovering from the crises of the past and we are going to be tested again in the current disaster.

If we talk about the recent crisis, the world had to face it as the global financial meltdown of 2008-09 when the global economy shrank for the first time after the Second World War. That year too, India not only succeeded in increasing at the rate of 3.9 percent but in its next two years GDP growth rate was more than eight percent. Prior to that, the 1991–92 crisis of balance of payments had beset India.

It was a purely domestic kind of crisis, the foundation of which was laid by random government spending in the last decade. In that difficult year, the growth rate was just one percent. Although India not only dealt with the crisis well, it also laid the foundation for the economic reforms that eliminated the license permit raj and increased productivity and oriented the country towards rapid economic growth.

However, the Covid-19 disaster is more dangerous than the 1991 and global financial meltdown. This epidemic has increased human suffering to a level not seen in many decades. This has led to uncertainties. Tired activities have come to an end. The mathematics of financial stability has gone awry. Its solution also lies in the vaccine, which may take one to one and a half years. During this time, only a phase of ups and downs will dominate. Covid-19 impacted India in three stages. Since the disease started in China, the supply for India was disturbed with its spread there.

Then due to the outbreak of epidemic in all the countries of the world, India got a big shock on the external front and finally when this epidemic spread in India, it had to put a lockdown to prevent it, which has disturbed the domestic demand and supply.

While our exports will decline due to the global recession caused by the epidemic, there will be a 23 percent reduction in the amount of remittance sent by Indians settled abroad. In the year 2019, India was the highest remittance country in the world. Under this, the country received $ 83 billion.

While the epidemic has given a tough test to the nation's healthcare economy, its widespread impact can pose major challenges in the coming quarters. All countries are experimenting with a strategy of mixed steps to overcome this crisis. In this, work is being done to prevent the spread of infection and to cut down the side effects. As far as India's strategy is concerned, it is mainly centered around three realities. One is India's high density of people, which is three times that of China, which makes it more susceptible to infection. The second weak health framework in which if the epidemic goes out of control will make it very difficult for India to handle the situation and thirdly that India does not have the resources to provide relief to developed countries.

Till now, India's strategy was focused on the first two points and it had limited options on the fiscal front, but on Tuesday a big wager has been made on this front with a package of Rs 20 lakh crore. Apart from this, the arrows which were in the quiver of monetary policy were also tried.

The largest part of India's working population is active in the unorganized sector and the government can only help them to a certain extent. In such a situation, he will have no choice but to return to work late. We are currently in the third phase of lockdown and preparing for the fourth. It has to pay a big price.

Manufacturing PMI stood at 27.4 and service PMI 5.4 in April. Both recorded unexpected declines. In such a situation, we have projected a growth of 1.8 percent for FY 2021 which can reach zero with some risks. If we talk about the past, the rapid growth in India after 2008-09 was made possible by huge fiscal and monetary packages, but there were concomitant side effects of high deficit and inflation. Increasing the lockdown will further aggravate the economy. In such a situation, the role of the government to support the community increases further.

The government initially offered a package equivalent to 1.7 percent of GDP, but that was insufficient. This is the reason why it has now announced a package equal to 10 percent of GDP, whose layers are gradually opening up. In fact, it is only at this unexpected time that policy-makers think beyond the traditional limits of fiscal scope for resources. This overall package of Rs 20 lakh crore is the result of the same thinking.