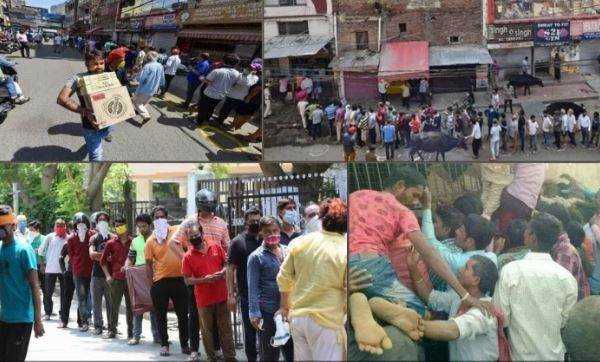 The first day of Lockdown 3.0 will be so heavy in the ongoing battle with the Rona epidemic, no one would have thought. After the lockdown of the first and second phases from May 4, according to the guidelines of the Ministry of Home Affairs, a number of business activities were exempted by dividing the districts across the country into three zones. But its biggest impact was on liquor shops and contracts.

After imprisonment for one and a half months, people came out of their homes for liquor as if liquor shops would be closed again the next day. Many people also shop for liquor, as if it is necessary to stock for a month. Photographs of people queuing up at liquor shops, long queues up to two kilometers in length, dominated the media throughout the day.

Thousands of people gathered for shopping for liquor in other cities including Delhi, the capital of the country, has dismantled 'Social Distancing', the biggest weapon in the war against Corona for almost a month and a half.

These pictures showing the efforts being made in the war with Corona and blown away by social distancing have increased the possibility of corona infection cases in the country more than before. If this happens, the role of alcoholics will not be underestimated after the Tablighi group in spreading the corona. People who do not drink alcohol may also have to bear the brunt of this.

Both the previous lockdowns were announced by Prime Minister Narendra Modi, but PM Modi did not announce the lockdown 3.0, guidelines were issued by the Ministry of Home Affairs. The ministry exempted economic activity with certain conditions, the most important being the decision to open liquor shops.

On the first day, there were record sales in cities across the country including Delhi, Lucknow. Health experts, scientists, and physicians have been saying from the beginning that the corona epidemic is most likely to spread in the crowd and social distancing is the most important way to avoid it.

When and how was the supply to the shopkeepers in the lockdown? It is not necessary to find answers to whether shopkeepers are drinking new liquor or old goods are being handed over. But the first day the effort to bring the economy back on track through alcohol was fueled by efforts to tackle the ongoing Corona crisis.

A recession has started across the world, which is going to increase in the coming days. Due to the ban on economic activities, people are becoming unemployed on a large scale. The condition of America, the leading country in the list of developed countries, has also become thin.

According to a BBC report, only 10.40 lakh people have been unemployed in the US only in March, which is the largest unemployment figure in the US after 1975.

In India too, it has been about one and a half months banning economic activities and big companies are running in losses during this period. This hit on companies has increased unemployment. A large section of the poor and the working class has become fascinated with pie. The government also has a big responsibility to handle this booming economy.