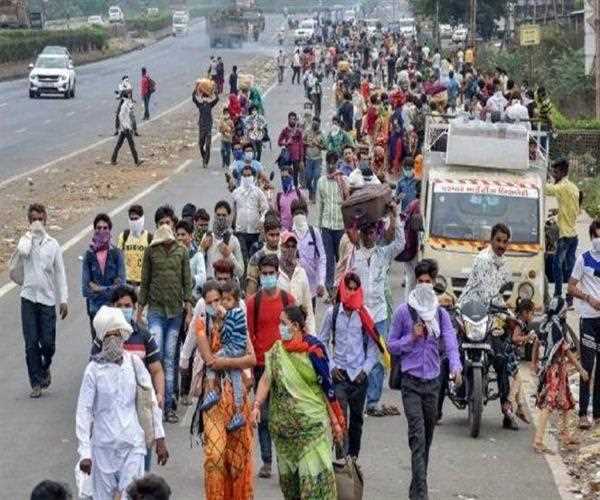 Migrant laborers are returning to their villages. The Ministry of Home Affairs has approved the movement of people stranded in various states. But it has a condition.

The Center has asked the state governments to appoint a nodal authority to facilitate the movement of stranded people. The Ministry of Home Affairs says that all such people should be kept in domestic quarantine for a fortnight unless they need to be institutionally quarantined for medical assessment.

The Center has also said that the states from which the workers are going, and where they are going, should agree to the movement by road only after those two states first check them and do not find any symptoms in them, and the states Will also have to arrange for sanitized buses. Many state governments want special trains and many trains have already left for migrant laborers.

Surprisingly, in many cases migrant workers, most of whom are impoverished, are being asked to pay house rent. There is also growing concern that if all these workers return home, then how will the work start in the factories.

But the fact is that despite the difficulties most migrant workers are desperate to return home. In Indore, Madhya Pradesh, police caught some people traveling in a tanker of concrete mixer truck. They were traveling from Maharashtra to Lucknow. The truck has been sent to the police station and an FIR has been lodged. No matter how much it looks, it does not surprise. The Indian state has rarely made policies keeping migrant workers in mind. Migrant workers know all this very well.

That is why they are resorting to such measures for homecoming. Kerala is an exception in this case. He understands the reality of migrants and is ahead of many states. Its policy responses reflect this. It has also created an investment plan — a return migration investment package, which will provide financial assistance to migrants to return. But returning home to migrants is one of the many challenges in the near future. Work has now shifted to rural areas.

What will happen when millions of expatriates return home? Most do not have money. What will they do? How will his family survive in the coming months? How ready is the village for them? How about the rural healthcare system? What is the plan for leading health workers like Asha Karyakar, who are paid less and have more workload? These questions need attention in the coming days.

The more migrant workers return to their villages, the greater the pressure on ASHA workers. State governments across the country depend on ASHA workers to trace those traveling and who come in contact with them.

Given the large number of people who are afraid of being quarantined and stigmatized if found corona positive, many want to hide their travel-history. Any kind of uncomfortable questioning can make them aggressive and ASHAs can endanger the safety of workers. And, of course, the more homes that Asha workers go into, the greater their chances of getting infected.

In view of the attacks on these leading health workers in the last weeks, their safety and betterment have become an important policy priority. Then there is the issue of access to quality healthcare. This is a problem in most parts of rural India even on normal days. This has become worse in the wake of Covid-19.

There are continuous reports about non-COVID-19 patients that they are finding it difficult to get healthcare in rural India due to lack of public transport. India can certainly deal with this, but one thing is clear that not all states are equally ready for this.

But the ground reality is not encouraging. Just as some private employers have not paid salaries to migrant workers in the lockdown period, despite instructions from the Ministry of Home Affairs, similarly MNREGA benefits are still limited.

According to official figures, only 30 lakh people were given work under MGNREGA till 30 April, although the Center gave its approval to give employment to MNREGA workers from 20 April. MNREGA work has not even started in many states. Two-thirds of India's 1.3 billion population is rural, spread over about 650,000 villages.

There have been reports of vaccination work and pregnant women being given check on delivery. The number of hungry people in rural areas has increased. Just as hopes can mislead, so can apprehensions eventually become false. The past is imperfect and the future is tense. In such difficult times, India needs social cohesion. No matter what  No, we do not have to let stigma or prejudice prevail.