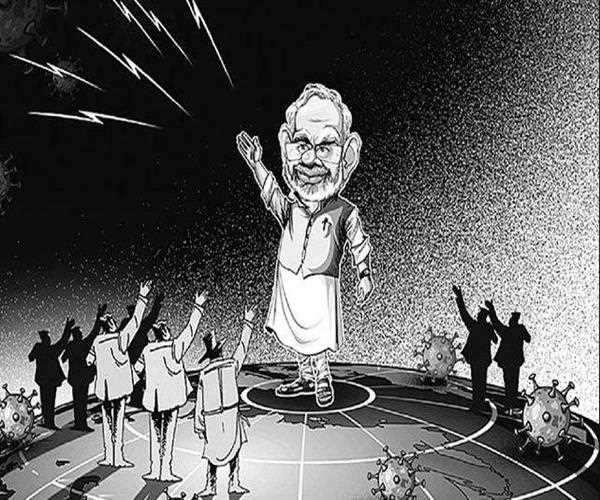 In the online meeting of foreign ministers of BRICS member countries, Foreign Minister S Jaishankar had said that India is providing medicines to about 85 countries of the world to help them overcome Covid-19.

This help is also being provided as a grant. In the last few days, some other countries have been helped. In fact, India's foreign activism is very meaningful, especially in this global health crisis. India's 'health diplomacy' underscores this aspect of how important India plays in the global health framework.

From the beginning, Prime Minister Modi was convinced that keeping the domestic front is a big priority and some tough measures were taken for it, but he also knew that India would have to step up for global activism and cooperation.

In this connection, he held video conferencing with the leaders of SAARC countries. At the same time, the idea of ​​such a meeting was also presented for G20 countries. Modi managed to give impetus to various regional and multilateral activism, even at a time when all the parties were looking directionless.

Most countries were entangled in their internal crisis and global activism was not a priority for them. India tried to fill this void created under leadership. India recalled the stranded Indian students in Wuhan early in the Corona transition. He also offered such help to neighboring countries. Since then, Modi and Jaishankar have been active in regular contact with global leaders.

Apart from the diplomatic exercise, India has done full justice to its title of 'Drugs of the World' by exporting hydroxychloroquine (HCQ) to many countries of the world. Demand for this drug used to treat malaria increased significantly in the treatment of Covid-19. However, at one time India had banned its exports and the alleged threat to India by the US President about it made a lot of headlines. Whereas the reality was that even before such a statement of Trump, India had decided to relax exports according to the need of the countries.

India provided this medicine from developed countries to Africa and Latin American countries. For this, the Indian Air Force resorted to special flights to foreign relief flights and diplomatic cargo planes.

Even in the global health system, New Delhi has thrown its health workers. Doctors of the Indian Army were sent to countries such as Nepal, Maldives, and Kuwait, etc. to help them to provide a local campaign against the virus. Indian medical staff is assisting health workers from SAARC countries with online training to help them enhance their capabilities.

Meanwhile, despite some negative statements from the Gulf countries, India's health diplomacy in this entire region was very solid and excellent. One reason for this was to avoid the possible migration of large numbers of their migrants from there.

During this time the Modi government remained in active contact with all the countries of the Gulf Cooperation Council, ie GCC. The importance of these countries can be understood from the fact that there are more than five million Indian workers who send about 40 billion dollars to India every year. When several Gulf countries requested for HCQ and Paracetamol, India also ensured supply to these countries.

India's efforts have received widespread acclaim globally. The tweets of the world's leading leaders in India's appreciation are proof of this. This has broad implications. This also shows the difference in world view about India and China.

Even in this period of the Corona crisis, China's international activism remained rude, aggressive, and irresponsible. At first, he set an example of his mismanagement in the Corona crisis. After this, when he tried to become a primate in difficulty, poor medical equipment only made him more upset. On the contrary, it is threatening the weak countries which raise the question.

Meanwhile, the entire focus of New Delhi has been focused on dealing with this crisis. At the same time, it is engaged in all possible help from other countries within the scope of its capacity and is active towards a broad global consensus. Perhaps that's why PM Modi also attended the conference of non-aligned countries. He attended this conference for the first time after becoming the Prime Minister.

Since the beginning of the Corona crisis, the Modi government has been focused on global consensus. India also understood the importance of global activism far better than many powerful countries.

At the global level, such a big initiative is different from India's old strategy when it was hesitant and self-centered about its limited ability to influence global discourse. This new vocal approach is inspired by the comprehensive foreign policy of New Delhi which aims to present India as a responsible and reliable partner on the global stage.

India's activism during this crisis is going to affect many aspects. Whether it is to set a global agenda or to get the most affected people safe from there or to help with their mastery on the health front, all these are going to have a long-term impact in creating a global outlook on India.

What India has done may not be entirely sufficient, but it has given the message that whenever it is needed it is able to meaningfully accept the challenge of dealing with any global crisis.