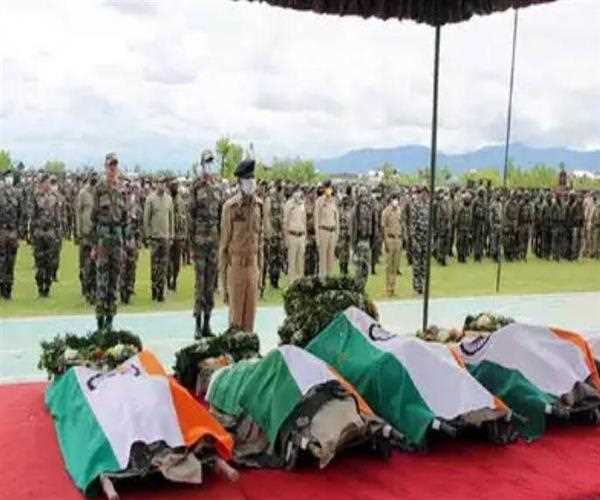 Terrorist incidents are once again gaining momentum in Jammu and Kashmir. At a time when not only India but the whole world is facing the crisis of Corona, raising the head of terrorism is a big challenge for the entire humanity.

On Monday, there was a terrorist attack on CRPF's patrolling team in Handwara of Jammu and Kashmir in which three CRPF personnel were killed. A day before that, five security personnel including a colonel and a major were killed in an encounter with terrorists in the same area. This is the biggest loss to the army in recent months.

Last year, when Article 370 was removed and large-scale security forces were deployed, it was felt that now terrorist organizations will be defeated. This was also felt on the ground for some time. But with the relaxation of restrictions, the old acts of terrorists started again. They have established their network from village to village and keep getting the necessary information from the villagers by pressuring them, intimidating them or taking them hostage.

In Handwara he also took the villagers hostage. Terrorist incidents have increased further since the lockdown began in Jammu and Kashmir. The loss to the army has been more than 40 days of lockdown, more than the entire year before the lockdown.

Security forces predict that the onset of summer may also be one of the reasons for the increase in incidents related to terror. Indeed, the ice begins to melt near the Line of Control (LoC) as summer begins.

This makes infiltration easier and increases militant activity in the Kashmir region. Most of the infiltration routes are covered with snow during winter.

Intelligence information is that about 300 terrorists are on the LoC to infiltrate into India from Pakistan Occupied Kashmir (PoK). For this, Pakistan is continuously violating the ceasefire.

This year has seen an increase of more than 50 percent in terms of ceasefire break compared to previous years. The Pakistani government has released Hafiz Saeed and several other terrorists from prison under the guise of Corona.

At the same time, it is trying to make Gilgit-Baltistan its full state. Pakistan's Supreme Court has allowed the government to conduct elections in Gilgit-Baltistan by changing an administrative order of 2018.

Obviously, the security forces have to be very vigilant. In the midst of Corona's terror, it is extremely difficult for him to carry out his duty.

On the one hand, they have to protect themselves from infection, on the other hand, they also have to play a frontline role of national defense. We have to boost the morale of our army and paramilitary forces, provide them all facilities and also respond to Pakistan's moves at the diplomatic level.