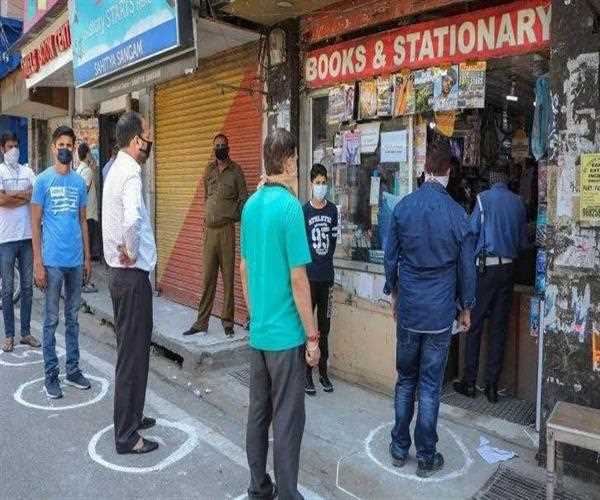 Tension And Risk Beyond Corona Pandemic

President Ram Nath Kovind has acknowledged that due to the universal influence of Corona, the entire world community has now come to the conclusion that if there is a crisis on the health of people in any part of the world, then the whole world can fall into its grip. Mr. Kovind's statement is important that after this global epidemic we will move from economic globalization towards health globalization.

He gave the example of the Spanish flu that came in 1918 and said that even after losing crores of lives, we did not learn a lesson. Remember, about six lakh Indians died in that epidemic. The nationwide spread of the coronavirus and the increase in the number of deaths due to infection has forced it to go to the root of fundamental problems. There is also a need to get to the root of the disease to prevent new infections and its spread.

The truth is that the boom in the economy (if we leave the present time) and even after seven decades of independence, the situation is not satisfactory. The World Health Organization estimates that two-thirds of India's population still does not have tap water available at home and the level of toilet sanitation is also not satisfactory.

Malnutrition is around one-third of the country's population. Every year 1.5 million infants leave the world before entering the age of five. Millions of people in the country suffer from infectious diseases, including TB, malaria, chum fever, Japanese fever, dengue etc.

On the one hand, while the amount allocated for public health continues to increase, the salary of people working in higher positions in medical services has also increased. In 1975, only 0.98 percent of GDP was allocated to health services, which is only 15 percent even after 30 years of liberalization.

Despite all government efforts, the situation on the health front in India is not satisfactory. In the last six years, the Prime Minister has taken many ambitious steps ranging from health planning. Despite this, only eight doctors are available in 1,000 patients in the country.

Whereas in Italy, which ranks second in the table of infected countries, its ratio is 4: 1. In this hour of crisis, there are only 45,000 ventilators in the country, while it is needed for serious patients. There are only 7,13,986 beds available in government hospitals and there is a severe shortage of primary health centers and community centers.

27 percent of the world's patients live in India. On average, 1,090 deaths are caused by TB in the country every day. Not only this, but more than 95 percent of the population of TB infected patients is also poor. Ayushman Bharat program has been started by the government. Apart from this, the aim is to ensure access to health services to more than 10 crore poor people and vulnerable families under the National Health Protection Mission.

But there are only 26,000 hospitals in the country with a population of 130 crore, that is, a government hospital with 47,000 people. There are only seven lakh beds for such a large population. On an average 10,000 people have only one doctor available in hospitals.

Covid-19 has erased the distinction between poor and rich countries. The United States and Europe became famous throughout the world due to their exploration and resources. But all their experiments collapsed in one stroke. Almighty America is expected to have a recession like 2008, when the world's largest bank Lehman Brothers declared itself bankrupt.

In the meantime, private hospitals have been disappointed, which fixed the number of tests in laboratories to be Rs 4,500 per patient. There has been a strong demand for the abolition of this amount, and a petition is also under consideration before the Supreme Court regarding the arbitrariness of private hospitals, demanding governmentalization of all health services in the country.

During this period, 14 lakh Anganwadi centers across the country are also closed, benefiting about 8.2 crore children below the age of six years and about two crore pregnant and lactating women. Strengthening infrastructure in the health sector is necessary to bring President Kovind's ideas to the ground. It also requires special incentives for rural areas. Today, a small country Cuba has emerged as an example to the whole world.

Many countries of China, America and Europe are availing the services of this country. This small country is providing its health services to about 70 countries today.

There is no private hospital in Cuba, and there are nine doctors per one thousand population. It is hoped that after the transition, when the situation will be normal, then we will be able to create a modern framework towards providing health benefits in the country by stopping all necessary work.