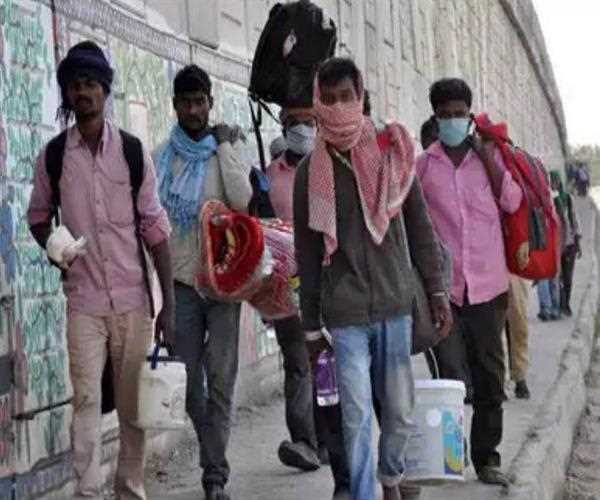 The Union Home Ministry has given huge relief to not only them but also their families by allowing migrant laborers, tourists, and students stranded in their places in the country. In this way, a big screw stuck in the lockdown is solved.

The lockdown will be lifted or extended on May 3, it has not been cleared yet but permission to send migrant laborers to their homes has raised hopes of getting rid of a problem. Like him, many students studying or coaching away from their homes were also stranded.

Some tourists were also here and there. All of them will now breathe peace, provided that their transport can be properly arranged with the mutual understanding of the state governments.

As soon as the lockdown was announced on 24 March, lakhs of laborers from metros like Delhi and Mumbai, started on foot towards their hometowns. Some of them reached their homes in the first shock but a large number were intercepted and sent to quarantine centers.

Many people living in the cities were provided with food and drink, but they wanted to go to their homes because they had no work here. Even complete arrangements for food and drink could not be made for everyone and they are feeling emotionally alone and helpless.

It hopes that at home he might find work in the fields. They also held demonstrations demanding to go home. The news of their plight was worrying about the entire country.

In the meeting with the Prime Minister, the Chief Ministers demanded that he be sent back, which the Central Government has accepted with many conditions. It has been decided that those who want to go will be screened. If they do not show any symptoms of Covid-19 then they will be allowed to go.

There will be sanitization of buses and social distancing will be taken care of. After arriving at the destination, people will be screened and placed in quarantine. The further accountability of the state governments is that the workers do not have any problem with reaching home.

Since the ration cards of many people are made in cities, they are not getting ration in their villages. This problem has to be resolved. Efforts should be made that people who do not get work in the fields earn their livelihood from MNREGA.

The irony of this episode is that on the one hand the government is planning to start production in factories, on the other hand, the workforce is moving away from the production centers. The workers should return to work after a few months, there should be a dialogue with them.