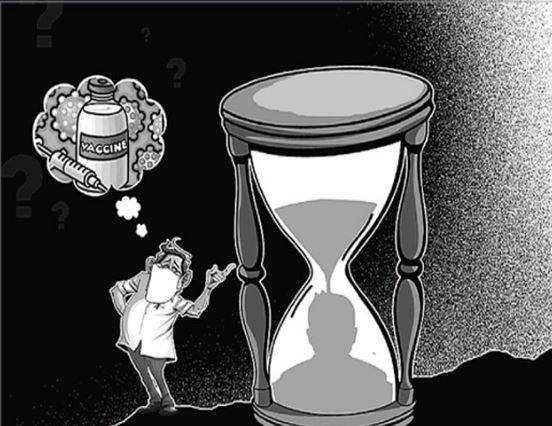 COVID-19 Crisis : Do Not Rely Only For The Upcoming Vaccine

When and how we will get out of the grip of the epidemic called Covid-19, its deadly wrap, no one can say. Not with full confidence. Neither scientist nor health expert, sociologist nor experienced elderly. What to do? Stranger that is, this challenge.

Totally unknown, never seen, heard, nor thought of. By the way, we had received pre-indications from it - from scientists, from experts. His warnings had arrived, stating that the way a developed, influential, accomplished man is exploiting water, animals, etc. for his eternal enjoyment is fraught with danger, but this warning How many did you hear?

He said a threat is on the environment, on the weather. The land has become feverish. She has meditated and if we do not give her relief from her fever, that fever will burn us and leave her ashes. Experts said the second terrible danger is the threat posed by zoonotic pandemics. He said that if we eat unsafe, unclean meat, then the same meat will eat us.

Swine flu, avian flu, SARS, mars, Ebola, Nipah .. all of them arising out of our profits, greed for indulgence and simultaneous violations of the laws of nature. Developed abroad are farms called Beef Farms, in which Mad Cow Disease started and thousands of animals were killed and buried to prevent it.

The countries that are trying to develop and today are called developing, also like the income of people increases, the spending power increases, in the same way, the food market presents to them the same way that their food is New hunger will increase and then be fulfilled and fulfilled .. unregulated, uncontrolled .., full of zoonotic danger.

Covid-19 is believed to have originated from the meat market in Wuhan. This will be true, but also know that behind this truth, Wuhan lies in every food market today.

That is, carelessness, filth, grease. It is seen in small markets, hidden in the elders. Is seen in the dhabas, the constellation is hidden in hotels. Where there are unclean plants, in bus bases, in rail stations, in the streets there is the same danger, invisible and ruthless. We are all doing nothing to change this situation and remain slaves of the market. There is a Wuhan hidden in all of us. Whether we are victims of Covid-19 or not, we are allies of the coronavirus if we ignore Wuhan hidden within us.

We learned the seriousness of the impermanence of our body and learned how valuable hospitals, doctors, nurses, laboratory assistants, sanitation workers, dispensaries are to us.

They are deity forms. We understood the basic truth that the epidemic does not exist in history or in medical books, we do not recognize rich and poor, Hindu and Muslim. We have understood that every day is unique, it should be used properly, for the safety and well-being of oneself and those less fortunate.