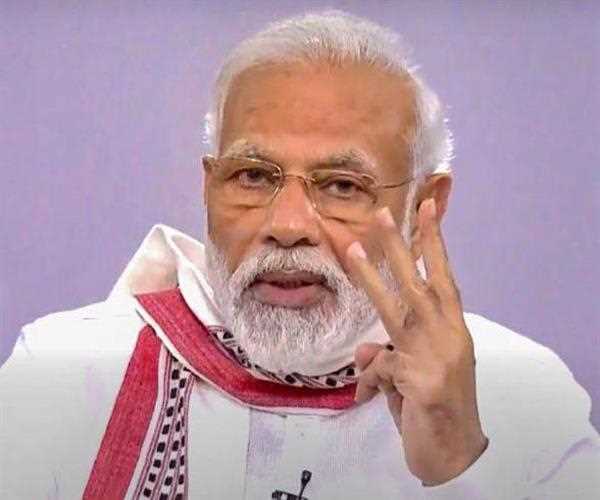 In the year 2001, on 26 January, there was a severe earthquake in the areas of Kutch, Bhuj, Anjar and Gandhidham, in the northwestern region of Gujarat, in which a large number of lives and property were lost, but due to their strong will and determination, the Chief Minister of Gujarat at that time Narendra Modi had won the earthquake crisis.

The world was shocked that such a huge tragedy in which more than 80 percent of the food was destroyed, millions of people have become homeless, thousands have lost their lives, but few days ago Narendra Modi, who assumed the responsibility of the post of Chief Minister How did it work to improve the situation? All the countries of the world were surprised to see that the Kutch-Bhuj area that in such a short time, the signs of wastage in these areas have become a part of history.

At the time when the discussion of corona infection had started in the world in January 2020, Prime Minister Narendra Modi had outlined effective measures to deal with this potential crisis. On March 11, 2020, the World Health Organization declared corona a global epidemic. Two weeks before that, all the airports in India had started an initial investigation of the passengers coming from all the flights from abroad. A minimum of two weeks of isolation or quarantine was required for all people from abroad on or after March 1, 2020.

At the time when the world was debating the severity of the corona infection, Prime Minister Modi was making all the remedies that would be necessary for the coming days. Whether it is the import of medical equipment or the testing center, the quarantine-isolation center is to be built by the army on January 31 or the security and health arrangements are made, the Ministry of Defense has asked Suratgarh, Jaisalmer, Jhansi, Jodhpur, Chennai, Kolkata, Deolali. Quarantine centers were prepared at places where Indians coming from abroad were kept. The Navy made similar arrangements in Mumbai, Kochi, Visakhapatnam and other naval hospitals.

Not only this, but more than a hundred government-private hospitals were also arranged by the central government for those who were found to have symptoms of corona infection or who came in contact with corona infected. Similarly, state governments were also asked to make concrete arrangements for this. Compared to the countries most affected by Corona worldwide, entire India was locked down much earlier. The decision to lockdown in a country with a population of 130 crores is the result of the visionary thinking of Prime Minister Narendra Modi.

Experts around the world say that there have been around 150 times fewer cases of corona infection in India due to the implementation of the lockdown. The prime minister's leading role in the war against Corona created a great deal of confidence among the people. It was amazing to see the public support from Janata Kafyaru to Lockdown. Prime Minister Modi's appeal is getting immense public support.

The public wholeheartedly accepted his efforts to raise the morale of crores of people locked in homes. The appeal to increase the enthusiasm of health, safety, sanitation workers by lighting the tali-thali or lighting a flashlight, mobile light was all a means for the Prime Minister to connect with crores of people of the country in this hour of crisis. All citizens of the country were determined to fight the havoc of Corona.

In the world's largest democratic country, people's unwavering faith in their leader will be a historic event of this century. Modi's tough and big decisions, filled with people's faith and people's health and well-being, kept India safe to a large extent from Corona's uncontrollable havoc.

Prime Minister Modi was constantly connected with the leaders of the neighboring countries and the world through video conferencing. Through the interaction with all the Chief Ministers of our country, people from social-industrial organizations, prominent people of various fields, feedback was taken and based on it.

By giving the responsibility of individual states to all the ministers of his government, he kept confirming the shortcomings and reforms by getting a ground report from the local administration. The Modi government took several steps to provide relief to the poor and needy amid the lockdown. During this period, a large number of beneficiaries have been disbursed through direct benefit transfer.

The Prime Minister always assured the people that if we fought this battle with restraint and discipline, then we would definitely win. At a time when many countries of the world are showing disenchantment and frustration with a directionless policy on this crisis, the people of India feel fortunate to have a leader like Narendra Modi standing with them as a visionary redemptive warrior. World leaders and people are appreciating Modi's visionary thinking and activism during this crisis and taking lessons from him.