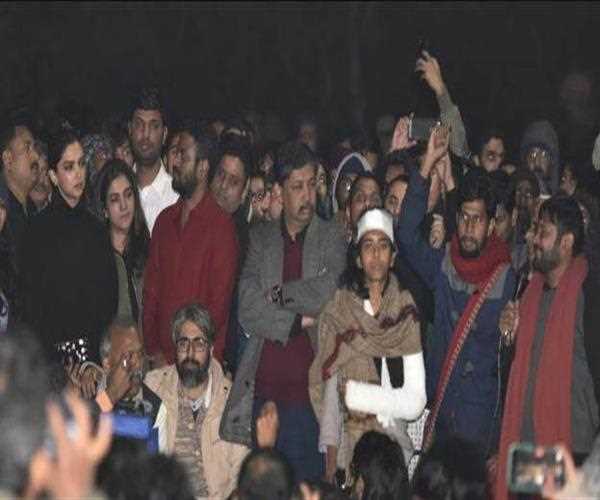 JNU's Protest is not a picture of this country

Deepika Padukone, who went to Jawaharlal Nehru University, is neither born in this country nor does she fulfill her responsibility towards this country and she does not even understand the real issues.

JNU's staged and sponsored protest is only a protest by the left-wing student organizations, which does not represent even 1% of the country.

Is Jawaharlal Nehru University the only top university in the country? not at all ! Whether any person accepts this or not, but this protest happening in JNU is only a cheap conspiracy to tarnish the image of India as a country. This includes Urban Naxals, left-wing student leaders, intellectuals and communist parties for which the only objective is that the country has to be broken and the power of this country has to be acquired in the name of Leftism.

They use their own people. For them, it only matters to fulfill their selfish motives. I do not know how common students come in their trap talks? This communism is equivalent to poison, it was said by the founder of Bharatiya Jan Sangh, Deendayal Upadhyay, for whom the whole goal was to serve the nation only.

Now it was clear that Deepika had to promote her film and she may be pretending to be a leftist but she was accompanied by Meghna Gulzar, daughter of leftist poet Gulzar who is also the director of Deepika's movie Chhapak. It can be said with certainty that Deepika can also remain a member of the left-wing club by remaining silent.

There are thousands of universities all over the country but why are the protests only in BJP ruled states? In Allahabad too, there is an educational institute called SHUATS - a Christian university, and no one has been seen protesting on any issue there, then what will people think that the protests in Jamia-JNU are the picture of the country.

Not only this, it is only the picture of the left-wing people whose job is to ruin the country and implement the communism-Islamic system here in collaboration with its jihadist allies. It is only needed that the Modi government needs to do a surgical strike on them. It is simply that it cannot exist.

All are advised not to follow the set agenda of these commies pests who just fulfill their interests in the name of democracy, proletarian movement, and different gimmicks.